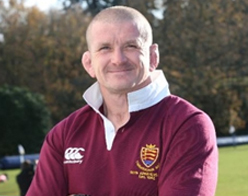 Rowntree, who won 54 England caps and three for the British and Irish Lions, will speak at the club’s golden anniversary dinner at Twickenham stadium in April.........