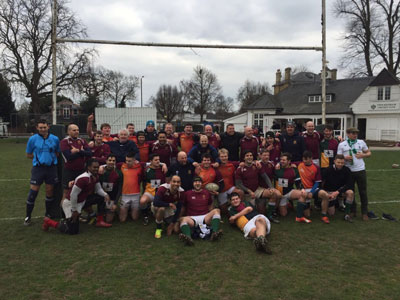 After a week of searching for opposition , post holes in the ground, post pads , someone to mark the pitch  - the moment had finally arrived.

11am came around fast and the eager Unders had all arrived with a look of steely determination in their eyes. No sign of the overs yet… Were they in the pub? Looking for their replacement hips etc was the type of banter to be heard.

Then at approximately 1145 someone shouted …“ Whats that? As they pointed across the foggy Twickenham Green. Out of the haze emerged a group of men , led on from the front by the Veteran Bart Redmond.

The Space Cowboys had landed…..

The unders kicked off and the ball was gathered by Glen Thompson who crashed into the oncoming pack with a thud. Game on. The unders started well and as expected at 100 MPH in the hope of wearing down the Overs. A nervy start from both sides with some terrific hits from both sides.  The first score of the game coming from Joey Morgan who found a few metres of space and the inevitable happened. Turned on the gas and he was away. 5 Nil to the unders.

It didn’t take long for the Overs bench to make an impact with Rory breaking down the blindside from a ruck, beating 2 defenders before bumping the oncoming Dan Jones on his ass ( Sit Yo Ass Down) and offloading to Franco Da Cunha around the half way line. The Portuguese after burners were switched on and he was under the posts for the equalizer.

For the unders George Flatman came in to his own shortly after with carry after carry, the big man bagged a couple of good tries as the defence began tired of him. His defence was also on form with hit after hit.  One particular hit was on the Ben Jones who famously stated only a couple of weeks ago that we aren’t abrasive enough. A rattle ribcage and a face full of mud later , I think he had his mind changed.

The unders started the use their higher fitness levels and ran in a number of quick tries through their speedsters Joe Morgan and Callum Savill. Joe was one on one with Bart on the wing for one of them , only one winner there.

But the Space cowboys weren’t done yet.

A couple more changes were made with Fitzy (thanks for doing the lines btw) coming on for Slash. Although FItzys passing isn’t a crisp as Slash he was quick to every breakdown and got good quick ball out. Fitzy found himself at the base of the ruck with 2 props at 10 , 12 . He spun the ball out to Rory who only had one thing on his mind and that was to test Kieran “Gandalf” Morgan and his thou shalt not pass attitude. Crash!!! He didn’t pass but he did hear the scream from Nigel at 12 …”Backdoor”  Rory in true tighthead style offered up the SBW pass to Nigel he broke clear of the covering Coogan to go under the posts.

Another try from Cookie in the corner despite the RKO from Coogs and the Space Cowboys were now only 8 points behind with 4 mins to play.

The unders kicked off deep and the overs found themselves deep in their 22. Tick tock. Billy Edmonds threw a hail mary miss 3 in the middle to give it to Nigel out wide who raced up to half way, a couple of phases later Overs were in the red zone.30 seconds left and Peter Forsdick crashed over to put the over 3 points behind. Jonno added the extras. The Referee was a whisper away from blowing up when he was begged by the overs to “give us one last shot”.

Kick off again went deep, and this time it was too much of an ask for the overs. Knock on, game over.

Man of the Match – Bart Redmond

Dick of the Day – George Flatman , for getting knocked out by an 80Kg Groundsman in the shape of new No9 – Fitzy