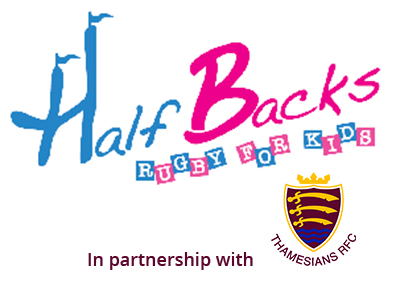 Twickenham, September 9, 2016: Thamesians RFC and Half Backs Sport are excited to announce the launch of new rugby-based play sessions for two to six year olds on Twickenham Green beginning on Sunday, 11th September and running each week thereafter.

“Thamesians RFC has built itself as a club with not only a serious approach to rugby, but also one with a strong family-friendly culture and an aim to give back to the community,” said Bart Redmond, Chairman, Thamesians RFC. “With our growing club, many of our members have small children and we are thrilled to offer them the opportunity to get into rugby early and potentially become the next generation of Thamesians!”

Working in partnership, the two organisations will be offering Half Backs’ fun, and active rugby-based play sessions on Twickenham Green with the first session on the 11th September 2016 at 10am near the Pavilion.

“We are so excited to be able to grow the Half Backs family in West London and to be able to work with such a great rugby club like Thamesians RFC is the cherry on the cake,’ commented Heather Smith Half Backs Director. “We encourage families with two to six year olds to get involved and are offering free trials for our sessions in Twickenham, the heart of rugby.”

Half Backs’ aim is to be the physical activity of choice for children aged two to six, by providing professionally run, safe and educational early development through rugby union. At a Half Backs session, children can develop teamwork and sportsmanship as well as fundamental movement skills such as running, jumping, passing and catching and kicking. All sessions are game-based and full of fun, led by experienced rugby coaches or teachers.

Thamesians RFC is a well-established club in the Twickenham area. Indeed, we are the only amateur club in Twickenham and the nearest to the home of English rugby. Formed in 1962, originally by ex-pupils of Thames Valley Grammar School, the club is now open to all players interested in a combination of competitive, social and champagne rugby. The club prides itself on its friendly and welcoming atmosphere and is accommodating to players of all standards. Thamesians RFC field three men’s rugby teams: the Thamesians IXV, Thamesians Spartans 2XV and Thamesians Space Cowboys Vets. The clubhouse on Twickenham Green provides an excellent home for the players, families and supporters. To learn more or to join the club please visit www.thamesiansrfc.co.uk.

Half Backs have been running sessions in west London for over three years, set up by passionate rugby players and coaches to share the benefits of rugby with the next generation. We believe that the best way to play sport and be physically active is with a smile on our faces having fun. Working in teams and as an individual allows your child to develop their personal skills. We create an environment that enables both fun and learning through a structured rugby based play program designed by qualified coaches and teachers. We accept new members throughout the year and offer a range of flexible payment packages which meet the needs of our customers. For more information, visit www.halfbacks.co.uk