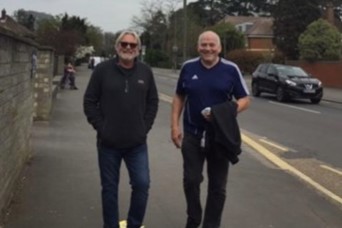 Al and Bob’s Walk for Myeloma

On any roll of honour for Thamesians top of the list must be Bob Mordell and Alan (Alfie) Mitchell. Both played in the winning Thamesians team in the National Old Boys Sevens back in 1976.

For the new generation - Bob went on to play  for Rosslyn Park and was in the Middlesex team that won the County Championship in 1976. He also appeared for England against Wales in the opening match of the 1978 Five Nations.  A year later he had moved to a professional career in rugby league and played for Oldham before a move back south to Kent Invicta.

Bob and Alfie have walked once a week since Christmas around their old haunts in the area and have so far walked a total of 65 miles. Before Alfie gets back to golf and Bob returns to the gym, they intend to complete 100 miles. The purpose is to raise money for Myeloma UK – so a fantastic cause.

Please support them by going to the Just Giving page: Al and Bob's Walk for Myeloma