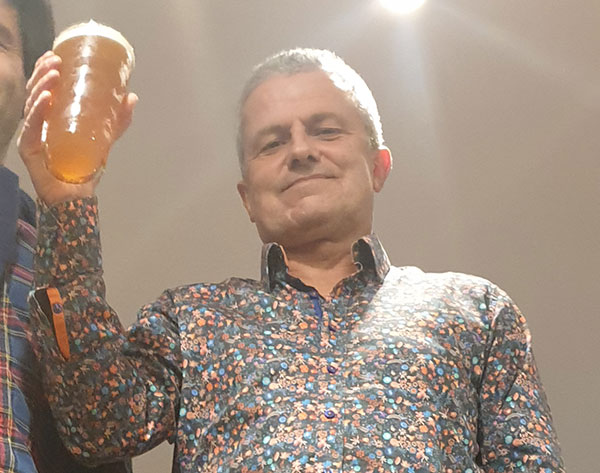 Firstly a big thank you to our President Bart Redmond for chairing tonight's meeting. Bart has continued to watch many games and even came on tour with the lads to Portugal and his continued commitment is much appreciated.

The most import thing to report is that T's have had a successful playing season. The firsts were in an elevated league - Herts/Middx One and finished a creditable finished 10th This might have been even higher (5th or 6th) without a deduction of points for fielding an ineligible player. They also unfortunately lost their coach unexpectedly due to illness at a difficult stage in the season. Highlights included wins against teams who eventually finished 3rd and 4th.

The captain of the firsts (Deano) went massively beyond the job brief and was the heartbeat of the playing side with great support from our Club captain, Lance.

Ben Pegna continues as the coach - at least until a new appointment has been made, and his influence was only positive in the final vital few games. He had 40 plus guys at preseason training last night.

The seconds were in Merit League 3 and just missed out on the play offs. A massive thanks to Chocs/Addie and Arlind for all their help behind the scenes that enabled the 2's to perform so creditably.

The only silverware went to the Space Cowboys under the captaincy of Rory — so congratulations and thanks to Rory for all the effort put in to running the team.

The season was a first for the ladies team who played against a number of other development sides recording a succession of wins. They also hosted a French touring side and reached the final of the Development Cup. Emily Eccles was a cornerstone of this success having taken over the captaincy unexpectedly and continued in this role throughout the season. Thanks too to Julie who has taken up some of the burden. Nigel only took over as Head Coach towards the end of the season but I am sure his experience and leadership will be invaluable as they enter a league for the first time next season. Buddha also remains an important part of the coaching group so thanks to him too.

Behind the scenes the club moved its playing pitch to Waldegrave School — the original home of the club. There have been teething problems but in general this has been a huge positive. In early July the pitch is to be resurfaced for the new season which is a large financial commitment for the club and is being paid for out of accumulated funds at a cost of around £6k.

The pavilion has also received an upgrade. The total contribution from Thamesians to this project was £2k above what they would otherwise pay in rent to TRFC. The cricket club made a similar extra contribution at the time. The council were dragged rather unwillingly with paying for the exterior works. All future improvements are being funded from the ring fenced rent and grants — for instance the new kitchen. This will continue to be the position that the club takes so further improvements will be gradual. The club's future tenancy has also been secured under written agreement with both TCC and the council. One massive move forward is that the club memorabilia (both TRFC and TCC) remain intact throughput the year and the two clubs are now operating much more collaboratively than in the past. Thanks to Grant for his advice on the building works and all the stuff he does behind the scenes.

There has also been a big effort to re-engage with some of the older membership via Golden Oldies events.

Regarding finances - in terms of the bar and the social side I believe that there was a record revenue but now that Rory has his feet under the bar the aim next year will be to increase sales, reduce costs, and improve profit as this is a vital income stream and needs to be improved.

There was a substantial improvement in the collection of playing subs but this still needs hard work which Stuart and Lance are addressing. The ladies will have this problem now too.

The men's playing side was subsidised to the tune of £16k last year and this was only possible due to ticket revenue for internationals and sponsors.

Adding a ladies team in to the mix only adds to this deficit. Stuart has made a point of thanking to all the sponsors and hopefully maintaining their level of support. Next year will be a difficult one as there are no autumn internationals and ticket revenue will therefore be radically reduced. T's will need to cut their cloth accordingly.

Looking forward I have held very early discussions with Waldegrave School and Sports England about a grass hybrid pitch and floodlights at Waldegrave School. This is very long term project but it seems to me it is worth exploring as the men alone currently spend £15k plus each year on training and pitches.

I know the men's side are having a meeting to agree core values and aims for the season ahead. I think Nigel has suggested something similar for the ladies. This is all good and will provide a focus.

Anything that comes out of the team meetings should be fed back to the committee and we'll be more than happy to listen.

Finally thanks to the rest of the committee for their support and hard work — I will not name them all but I want to pick out one unsung hero — Smithy — who is a massive help in keeping a cap on the more enthusiastic and costly ideas. He takes a lot of stick and does a thankless task as treasurer and keeps everyone in order.

That's all from me. Let's make next season an even better one