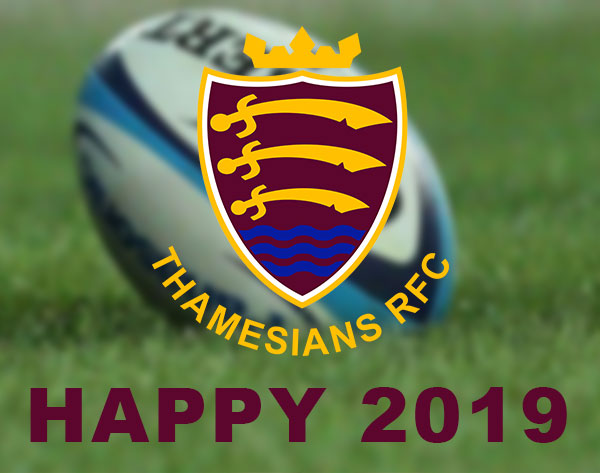 A BIG THANK YOU TO EVERYONE AS THAMESIANS MOVE FORWARD IN TO 2019!

The TRFC club committee set itself some ambitious targets over the last six months most of which we have ticked off:
We are not being complacent - the ladies team is still in its infancy, the pavilion still needs significant works to the back of house areas – ladies loos and kitchen, and there is much work to be done to improve the synergy with Waldegrave School.

Relocating to Waldegrave has cost quite a bit of money. We have already invested significantly in ground improvements plus the costs of a new store, pitch marking, rugby posts, etc. Next summer substantial improvements are being undertaken to the surface of the pitch. The pavilion improvements have also reduced our coffers.

Against this backdrop It would be greatly appreciate it if anyone who has inadvertently let their social membership lapse could visit the website and re-join/ renew – even I managed this electronic transaction in a matter of minutes. The cost is £48pa (circa £1pwk) and it really would help if everyone could maintain this contribution. If you prefer to pay by a more traditional way (cheque or cash) then please contact the club treasurer, Mark Smith, or the membership secretary, Tee-Jay

Thanks for your continuing support.

Most of all thanks to the committee for their unity of purpose in achieving all of this. Apologies to those not individually named above but this has been a real team effort made possible by everyone pulling in the same direction.

Best wishes to all club members for 2019 which I’m sure will be another great one for the club,
JD
Club Chairman