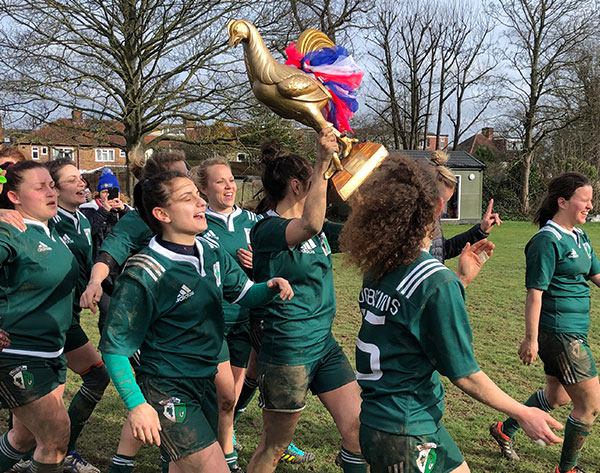 Unfortunately Le Coq has returned to France after a hotly contested game between Thamesians Ladies and their French counterparts from Suresnes.

Sorrows were drowned during a three legged pub crawl. The next day this was followed by our older brigade being treated to an excellent French brunch by Eric and Ariane Fradet (see photos), then the small matter of England dispatching the French at Twickenham, and finally the singing by a combined group of Basque singers and the Suresnes supporters - many of whom had donned their rugby boots against Thamesians in years gone by.

The 22-10 defeat at Waldegrave must not be allowed to mask the enormous advances made by the Ladies team this season. After relatively easily dispatching other development teams before Christmas the ladies team have had to up their game since the turn of the year against stronger and more experienced opposition.

A good support will be appreciated for their next match on 3rd March when they visit London Irish with the inspiration of someone called Nigel Botherway coaching on the sidelines!

Next year Thamesians Ladies will hopefully cross the channel and bring Le Coq back to its rightful home!

View More Photos of the Game >>