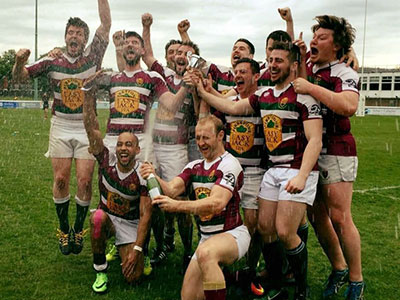 Thamesians have a rich history in rugby sevens. This goes back to the 1970’s when the club had a fine record in the Middlesex 7's. Preliminary rounds were played at the London Irish ground in Sunbury, and later at UCS Old Boys/Centaurs in Isleworth. On several occasions the sevens team just failed to win the last game which would have taken the club to the final 16, and Twickenham Stadium!

In 1975, Thamesians became the first London side ever to win the Sunday Times National Old Boys 7's, bringing home the magnificent trophy from Birmingham and gaining reportage in the national newspapers (press cutting, original programme and team photo displayed in the clubhouse). Various members of that victorious team still can be found in our club bar and supporting from the side lines to this day (Robin, Gordon, Alfie, Bob).

The modern generation have continued this tradition and next weekend the girls kick off their season at Barnes where they are defending the trophy that they won last year. The schedule for this summer is below so please come along and offer support.