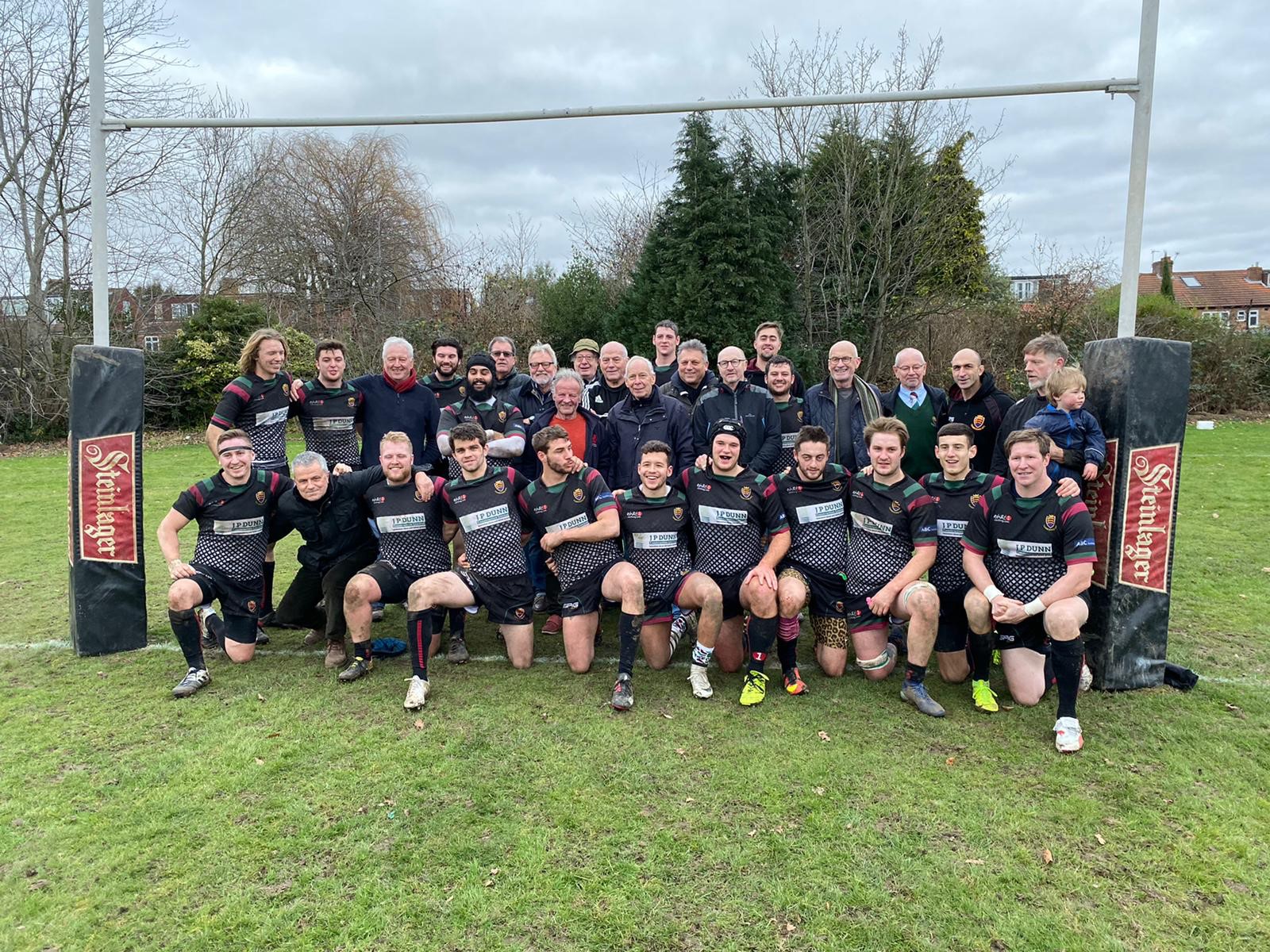 The Season So Far

Last weekend saw a substantial crowd watch Thamesians beat Verulamians at Waldegrave School. Many of those attending had played on this pitch forty plus years ago as pupils of Thames Valley School. Words before the match from one of these veterans, Robin Chandler, were a reminder to the current batch of players of where the club has come from. If the 68-0 score line was anything to go by then Robin needs to be repeat whatever he said. The watching old boys appear in the photo below and a massive thanks for their support. The result leaves T’s in seventh place out of eleven in Herts/Middlesex 1, but the league position belies a steady improvement in performance as the season has progressed and if narrow defeats against the likes of Mill Hill, St Albans, and Saracens Amateurs can be reversed in the return fixtures there is every reason to be optimistic in the New Year. The quantum leap in skills, fitness and discipline is very much down to new Head Coach, Ben Pegna, who constantly goes well beyond his job brief. The squad has bought in to this and the benefits are now being reaped. Thanks also to Andrew Philp (Choc)  for all the invaluable back-of-house work he does as Team Manager.

As a footnote to Saturday the team also featured Ollie Smith (formerly a player for England and the British and Irish Lions). His registration as a player and encouragement of the lads in training has been a great boost.

The second team (Spartans) are currently fifth in a ten team league after a narrow reverse on Saturday against Wasps Amateurs (17-14).  With a game in hand against the two teams immediately just above them (Hanwell and Whitton Lions), Spartans will be hoping to improve on that position in the New Year. The heartbeat of the seconds has been the joint captains Matt Bond and Louis Trumble. What they could do with is a team manager to help behind the scenes so if anyone wants to place their head above the parapet and help, please get in touch.

The ladies side still sit second in their league - NC2 South East (West). This is despite a number of reverses as the injury toll has gone up to a number of key players in recent weeks. T’s also remain the second top scorers in the league with an unhealthy number scored by first team captain Emelia and number eight, Emily Powell. With injured players returning after Christmas hopefully it will be onwards and upwards in the New Year. To put this in context, this is the ladies first season of competitive rugby and a number of complete novices are being bedded in against experienced teams. Head Coach, Nigel Botherway, also has to prepare the side for their visit to Paris to try to recapture ‘Le Coq’ from Suresnes in February, when they will be supported by a large travelling support. A big thanks to Budha who recently decided to stand down from coaching the ladies 15’s team, and a thank you to Kieran Morgan for agreeing to take over to coach the backs going forward. The concentration for now is on the 15’s season but occasionally one eye drifts towards the ladies sevens tour to Zambia in August – so an exciting time to be part of the ladies squad!

I would also like to thank Budha and David Osborne for their help in coaching the boys and girls sixth form at Waldegrave School this term. Hopefully we’ll see some of their protégés migrate to the senior side next season.